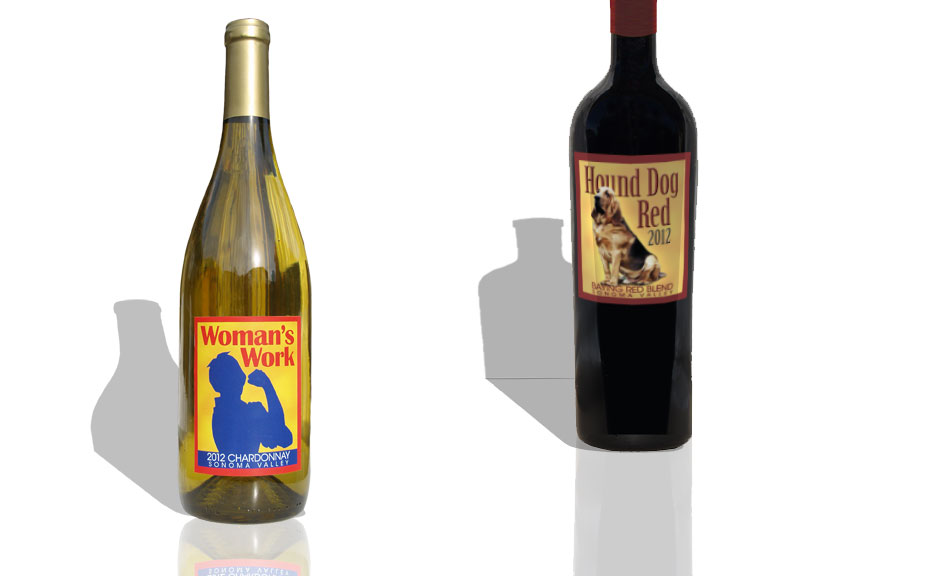 Electrician by day, winemaker by night, this garagiste winemaker chose the name and base artwork as it related specifically to a vintage in which very careful harvest picking was required (left). The color scheme was chosen to honor the original Rosie the Riveter artwork but with an updated look that reflects a completely different industry.

The second wine – a red blend – was designed to have a somewhat similar appearance but no silhouette. A howling good red!

Both design projects’ primary challenges were meeting the client’s limited budget. With less than a barrel’s worth of wine each, only a small number of labels were required. On demand printing techniques were used with a peel ‘n’ crack cold adhesive. 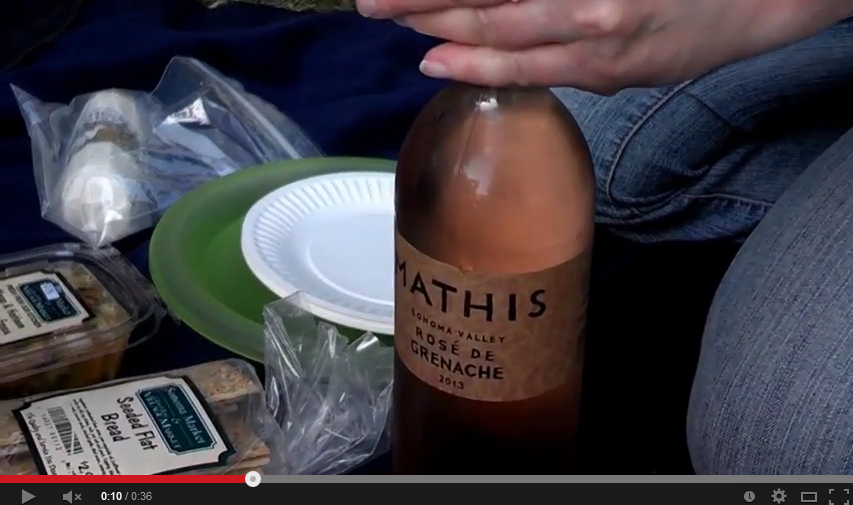 Product Fun Video – How to Get a Little Mathis Rosé Gallery

It’s not unusual to have video footage showing off product without a sense of how it will be used. One of the best ways to build brand-raving fans and [popover title=”Influencers” title_bg_color=”#eaa41c” content=”People who are your biggest and most loyal fans who also create visibility for your product or service by sharing your news with their own social networks.” content_bg_color=”#eadec2″ bordercolor=”#eaa41c” textcolor=”#333333″ trigger=”click” placement=”” class=”” id=””]influencers[/popover] is to keep them in the loop and entertained with the shortest of videos. Keep it light and fun if you want them to come back for more!

Behind-the-scenes: Shot with a smartphone, this was an easy way to showcase the wine in a natural setting – a picnic. It was shot in less than a minute (with other shots or angles taken at the same time). Editing was relatively quick and easy, getting a feel for when a supplementary caption might elicit a laugh or minor explanation. For a minor piece shown on social media channels, the goal is not to make it look perfect or wildly expensive — just fun! 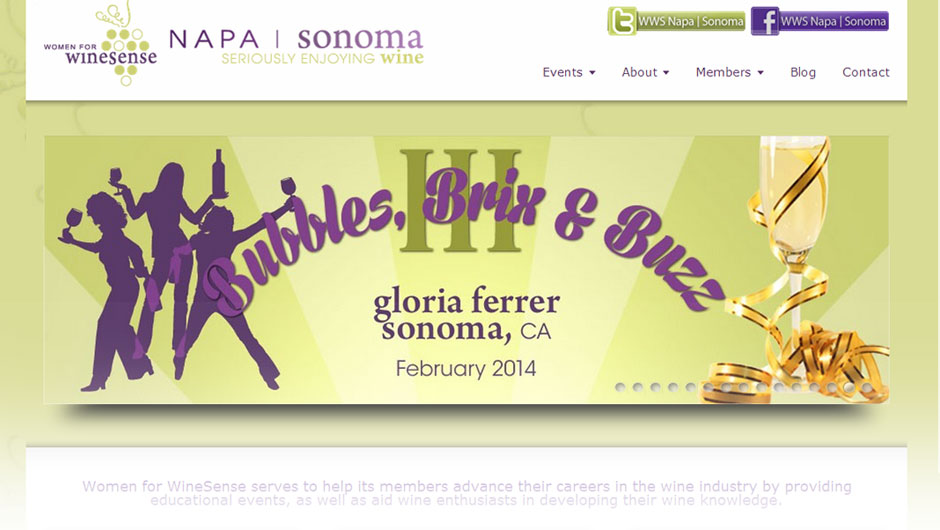 The parent organization’s website was considerably out-of-date, with an inflexible visual design and poor navigation, as well as lacking analytics for tracking site success. The chapter chose to craft their own site. Goals included:

One of the best features of this new site is that it is constantly evolving today due to ease-of-use. New pages and posts are regularly added; existing content pages are adjusted as needed. And site analytics have proven invaluable in showing how site visitors use navigation and content, directing how improvements are made. 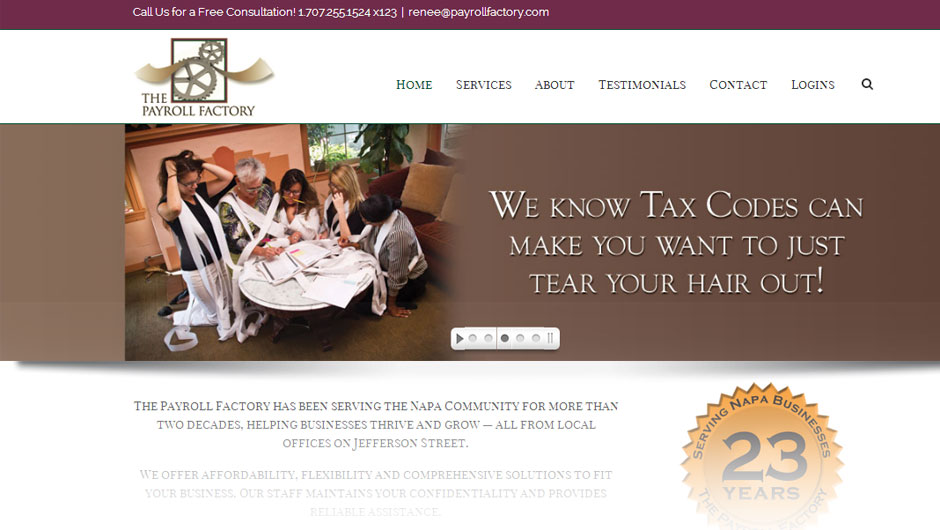 While the existing website was functioning okay, it could not be updated. And the company’s owner wished to update her site with new information, staff enhancements and give it a more modern appearance. Goals included:

An interesting challenge in developing this site was crafting a story from the new photos used on the home page slider. Each image captured the potential pitfalls of accounting. And the trick was to convey The Payroll Factory could resolve any problems — not be stuck in them. It all worked out. The client said,  “I love my website so much. Thanks so much!!” 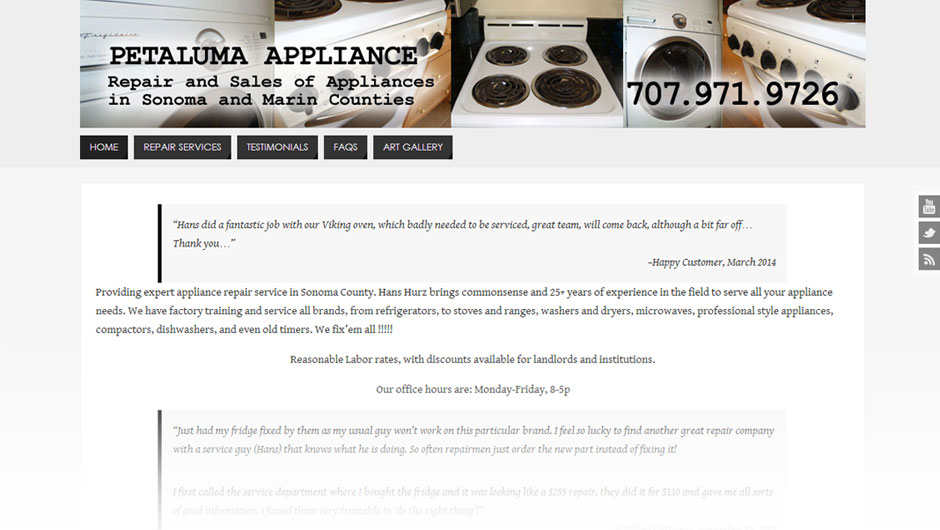 This site (still under construction) makes a good example of design on a budget. Goals included:

What is “design on a budget”? Depends upon the client. In this case, the client was just going out on his own having worked for an appliance repair service for years. Since there was no collection of images taken over years of appliance repair, we improved the site with free images and shots I could quickly take. Not perfect! But appliance don’t have super model looks either. Stay tuned for more when the site is finished! 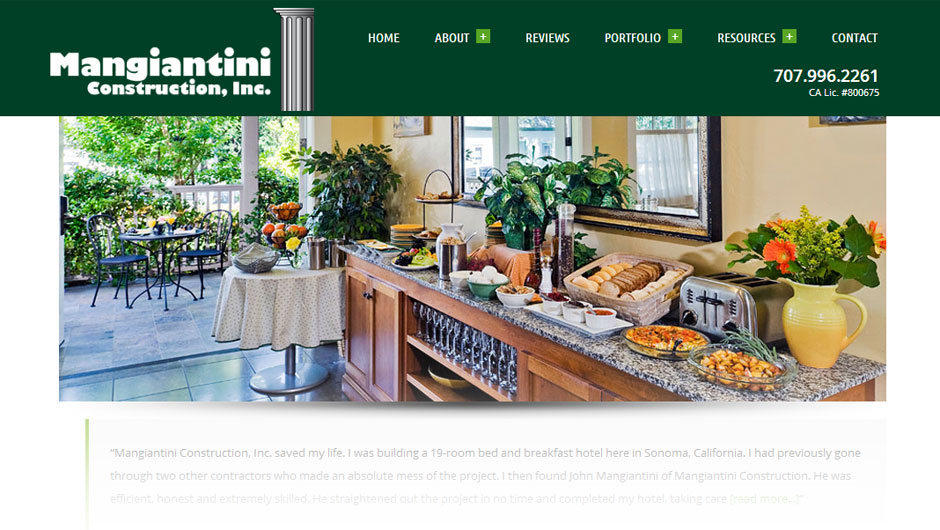 The company’s old site was out-of-date, un-updatable and did not reflect their current construction portfolio. Goals for updating included:

The client now has a showcase of his current work which can be updated at any time. Over the past several months we have supplemented the portfolio with new case studies and client testimonials. Reports the client, “We are so pleased with your services. Great job!!!” 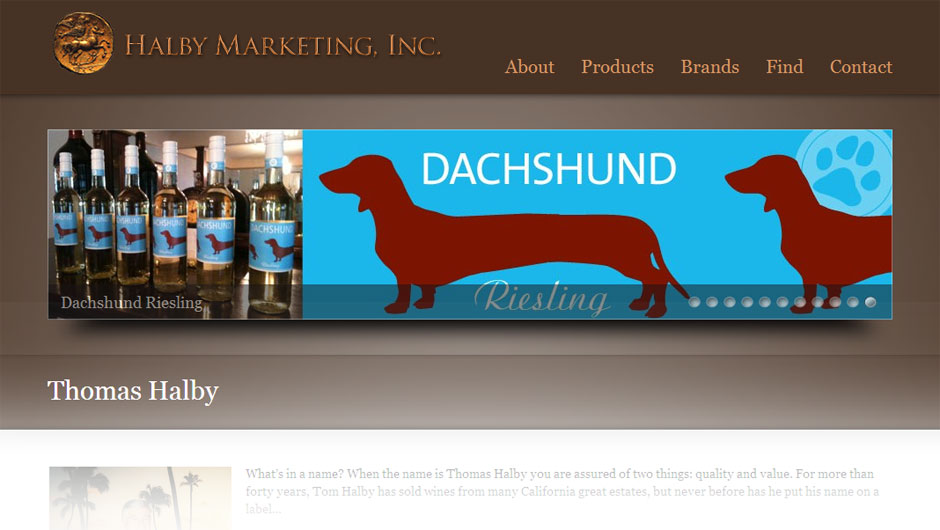 This project began as an update. But we quickly found out that the WordPress website had been built with an unstable structure. Triage began behind the scenes while the site continued to put on a good face to the public. The client’s goals included:

We transitioned to the new site seamlessly on the public side. Site traffic has risen steadily over more than a year. 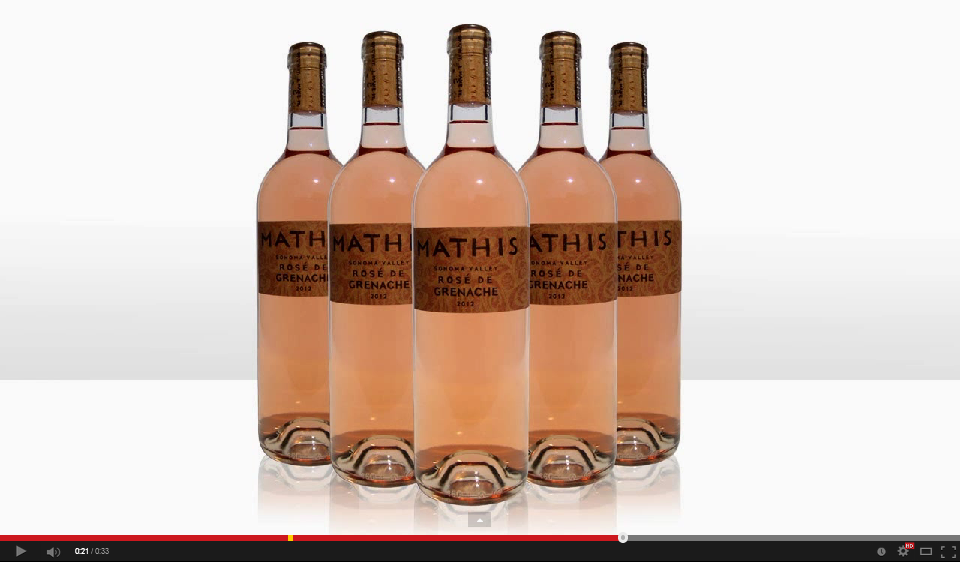 Product description videos are ideal to show off its features and benefits. Tell the audience things that they won’t read about the product in a brochure. (A picture is worth a thousand words!) Use the opportunity to show the product’s motion capabilities. Whenever possible, make the video content fun. Sharing is a key component to video success. So the more entertaining it can be, the greater the possibility of sharing by [popover title=”Influencers” title_bg_color=”#eaa41c” content=”People who are your biggest and most loyal fans who also create visibility for your product or service by sharing your news with their own social networks.” content_bg_color=”#eadec2″ bordercolor=”#eaa41c” textcolor=”#333333″ trigger=”click” placement=”” class=”” id=””]influencers[/popover] increases. Most importantly, keep that information unique and valuable to viewers and fans.

Behind-the-scenes: As there was no video footage available at the time (since the client was in the middle of harvest and unavailable), this video was assembled only using still photos. Challenges included conveying the flavor profile of the wine and the foods it ideally paired with. Finding appropriate royalty-free music and a mood that reflects the client’s brand were also key.  As this was a type of “music video” for a product, the editing time was exponentially longer than a live-action explainer video as each beat required matching exactly. 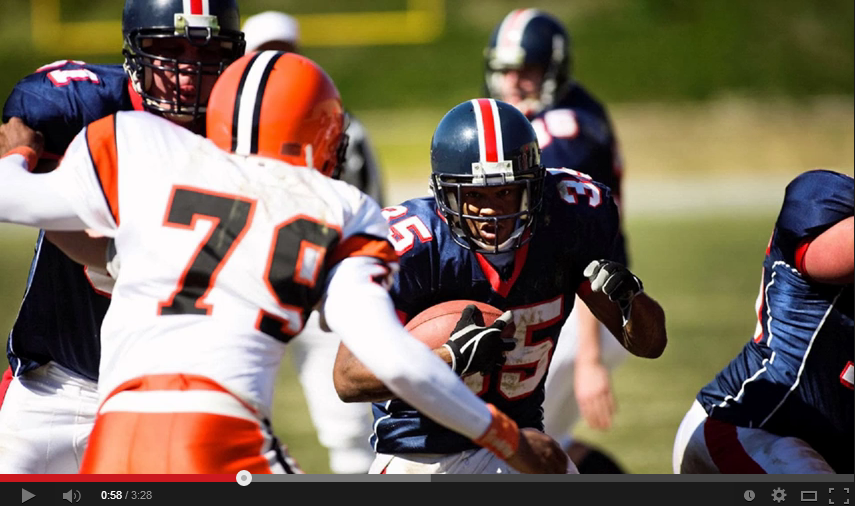 Selling at Thanksgiving seems rather heartless. But you can reach out to your loyal customer base to entertain them. It’s an added bonus if the “entertainment” provides brand reinforcement. In this example, we had a lot of available imagery for the holiday, a few still shots of the brand’s wine, plus some recent motion footage in the vineyard. The rest of the story evolved from the tale we could craft using the available elements. Necessity is the mother of invention! 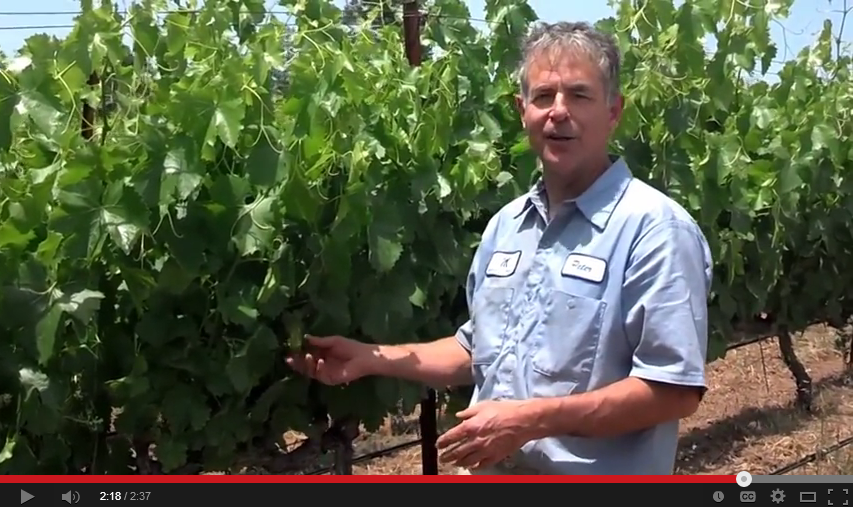 Explainer videos are ideal customer education tools. They serve in the function of Hollywood’s old behind-the-scenes slash how-it’s-made movies and trailers that would run before or after a film. For a product like wine, there is considerable mystique behind how a grape becomes the elixir of the gods. That allows for an unlimited number of “explainer” film shorts, each providing a tiny piece of the puzzle of how this tiny berry becomes a magical beverage.

Hazards of filming in the vineyard? Sunlight! It casts deep shadows and reflects bright highlights. Ideally we would shoot late in the day when light is more filtered. But the star of these videos is available to shoot only when he’s available! So if the light isn’t perfect, we make do. Another hazard is the great outdoors: airplanes can wreak havoc with the audio as can wind. If the star of the video is available for only short periods of time, that means I’m left to sift through raw video footage later to determine if I can make cuts around airplane interference or wind. Lastly, on rare occasion the star goes up on his lines! Given the tight timeframe, I often keep shooting and direct a quick rewind to catch the train of thought again. Editing irons out the hiccups!